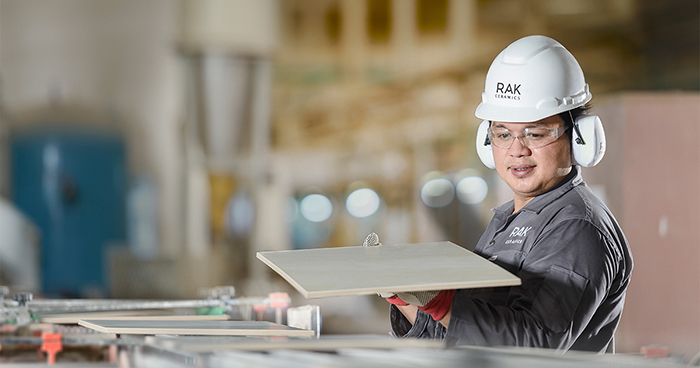 As the demand for distinctive and sustainable ceramic floor tiles grows, RAK Ceramics' emphasis on sustainable production has increased. The company has invested in several new technologies, including efficient online mosaic production, environmentally friendly processes for recovering and recycling rejected tiles, installing an advanced scanning solution, the next generation of digital glazing, and launching an electric vehicle initiative.

Mosaic creation at its finest.

RAK Ceramics has invested AED1.9 million in an online mosaic production system that includes a press, digital machine, glaze line, kiln, paving line, and starching machine. All equipment is PLC-controlled, and over 99% of it is operational.

RAK Ceramics has invested AED1.1 million in cutting-edge crushing, grinding, and hammering equipment that allows for reusing fine powder generated by broken or wasted-fired porcelain tiles. The machinery can produce up to 50,000 metric tonnes of powder per year.

Dr Basavaraj S Patil, CTO, Tile Manufacturing. We launched a closed-loop manufacturing initiative in 2018 that allowed us to recycle up to 30% of waste ceramics. RAK Ceramics has achieved 100% recycling of damaged GP tiles by 2022, and we have already recovered and reused 1,800 metric tonnes."

Previously, the company could recycle at a rate of 30%, which increased to 60% thanks to the recycling of the GP and Polishing muda produced during the process. The new equipment makes it possible to grind down dense materials and reuse them in various industrial applications. RAK Ceramics can now recycle 100% of the damaged GP tiles and has already recovered and reused 1,800 metric tonnes.

In response to the achievement, Abdallah Massaad, RAK Ceramics Group CEO, said, "We believe this milestone is an important step towards our sustainability goals." Reducing our reliance on landfills, lowering CO2 emissions, and reducing the need to import materials from faraway places."

RAK Ceramics has spent AED0.7 million on an upgraded design development scanner. The METIS DRS-1520-DCS integrated system has a 90x150cm enhanced scanner format and an optical resolution of up to 1,200 PPI.

The scanner features an improved DC Synchro-light lighting system with improved lighting and colour rendering and cutting-edge METIS technologies like natural colour and appearance capturing. In addition, the system has advanced 3D mapping capabilities and provides detailed data that can be used to optimise production.

"The new scanning system is a significant advancement for our in-house research and design development capabilities and allows us to explore new products with a greater attention to detail." said Leonardo De Muro, VP of Marketing and Communication.

RAK Ceramics has invested AED0.6 million in a next-generation digital glazing system that, when compared to traditional technology, reduces glaze waste by 30-45%.

The system is fully automated to control glaze levels and does not require human intervention. It also has an automatic washing function to save water. The machine can apply a consistent minimum weight of 25 grams and a maximum weight of 100 grams to 30x30cm surfaces.

The Electric Vehicle Initiative has begun.

RAK Ceramics has launched a new e-bike initiative across its manufacturing facilities in the UAE. The new e-bikes, which have a low environmental impact, allow staff members to easily travel between facilities without the need for petrol or diesel cars, reducing general emissions and noise pollution in the surrounding area. RAK Ceramics has introduced more than 70 e-bikes, with more units on the way.

"We are proud to have launched our EV initiative with the introduction of e-bikes. The new electric bikes offer a convenient and environmentally friendly alternative to driving a traditional car around our facilities." said Mr. Leonardo De Muro, Head of Transportation and Logistics.

Founded in 1989 and headquartered in the United Arab Emirates, RAK Ceramics serves clients in more than 150 countries through its network of operational hubs in Europe, the Middle East and North Africa, Asia, North and South America and Australia.

RAK Ceramics is a publicly listed company on the Abu Dhabi Securities Exchange in the United Arab Emirates and, as a group, has an annual turnover of approximately US$1 billion.